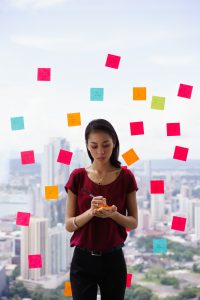 Did you know that multi-tasking your marketing doesn’t really work? The more projects we start and the more marketing we throw out there – often the less productive it all becomes. Is it better to focus time and energy to get one project working to generate leads and new business or to have 10 projects splitting focus which all seem disappointing?

And with multitasking in general, the thought is that because we are so busy we almost have to do more than one thing at a time to accomplish the growing list of activities that pull on our limited time. The facts prove out, however, that although we feel we are getting more done, we are actually causing ourselves more work. Here are a few studies that may surprise you about how multitasking actually has inverse effects on productivity (and even makes you less intelligent!)

When we multitask, (i.e. try to perform two or more related tasks at the same time or by alternating rapidly between them) errors go way up. That is according to a study done by David Meyer, the Director of the Brain, Cognition and Action Laboratory at the University of Michigan. The result is, according to this study, that it takes far longer to get the jobs done than if the tasks were done sequentially.

A Harvard Business Review post says that multitasking leads to as much as a 40% drop in productivity, increased stress, and a 10% drop in IQ (Bergman, 2010). Now that’s scary!

A 2009 study at Stanford, reported in Proceedings of the National Academy of Sciences, looked at 100 students who multitask during the day with all their technology, the internet, school work, classes, etc.

What they found was that the more the students multitasked, the worse they performed.
The human attention span is 8 seconds today and that means that no one is paying attention to anyone or anything for very long. Let’s bring focus back and I bet we will also see results increase – especially in our marketing. But it will not be an easy task since distraction and multitasking are standard operating procedure. What can you do to change it?