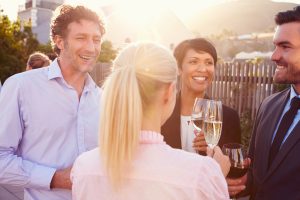 In general, networking to increase sales quickly can often be a frustrating undertaking. It seems, the more hungry you are for the sale, the less effective your networking activities will prove to be. Many professionals join their local Chamber of Commerce or business-networking group, and are initially excited at the prospects. But the unfortunate reality is that these groups often don’t live up to expectations; so we quit and look for another way to drive sales to our business. But wait! There are principles of networking that do work – and they may be the opposite of what you may believe about networking.

When writing the book, The Connectors, I observed fairly quickly that the most successful businesspeople I interviewed were incredibly skilled at networking. But their success was achieved by operating differently than the way I was taught to network.  The main difference? These successful networkers were not out to make a sale during networking!

The focus of successful networking is actually not about gaining an immediate sale from the people you meet. In fact, that tactic almost never works. Instead, success tends to come from focusing on building advocate relationships – those that turn into referral connections. These connections serve as potential conduits to other potential clients. So the secret is that successful networking is founded in the desire to build a mutually beneficial relationship with someone who is a connector, and one that may never even buy your product or service.

Networking, in essence, is not exactly about who you meet in your networking activities – it’s about who they know. And it’s about sharing who you know with them. This leads to a relationship based on referral trust and credibility that results in your advocates doing the selling for you. It’s contrarian and it’s smart!

One response on “Most People Get Networking Wrong – Are You Winning or Losing at Networking?”